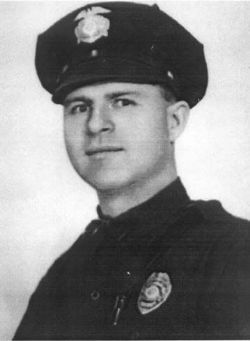 In the Line of Duty

Born: January 6, 1899
Appointed as an Upland Police Officer: May 17, 1928
Died in the line of duty: September 17, 1940
Officer Dark was in pursuit of a speeding vehicle on September 13, 1940. He was traveling westbound on Foothill Boulevard. He chased the vehicle into the adjacent town of Claremont at speeds reaching 90 mph. At the corner of Foothill Boulevard and Yale Avenue, his vehicle struck another vehicle making a left turn in front of him. Officer Dark died four days later from injuries he suffered in the collision. The inquest found that the other motorist's "careless driving" caused the collision. Officer Dark was entombed at the Pomona Mausoleum in Pomona. Officer Dark was survived by his wife, Walteen, and his two children, Harold and Maxine.
Terms of ServicePrivacy Policy
Copyright © Upland Police Officers Association
Website built and maintained by New Equity Productions/NEP Inc.

NEP IS A UNION WORKPLACE!
PROUD MEMBER OF CWA L-9003